Pinch me, because I must be dreaming!

On Monday morning, January 23, 2017 I sat down with my husband, Steve and a cup of coffee, and watched myself on tv!

To be precise...it was the Home & Family tv show on Hallmark channel, hosted by Mark Steines and Debbie Matenopoulos, with guest host Jill Wagner. Jill was the host of Handcrafted America (on INSP network), a show that filmed Steve and I with our black ash basketry at our home last summer. I had been invited to be on Home & Family to talk about our baskets and promote our Handcrafted America episode, that would air in February, 2017. I also had the opportunity to do a DIY segment on weaving a Braided Heart Ornament of wheat.

My whirlwind trip to LA to film the Home & Family episode was a true adventure. I was met at the Los Angeles airport by my driver, a short older gentleman who had been born in Peru and was adorable. After we picked up my luggage, he asked, "Are you a movie star? It says here that you are a VIP". After I stopped laughing, I said, "No. I'm a basketmaker". He replied, " Oh. Then you are a Very Important Artist". I liked this guy immediately! Before we reached the black limousine he paused, looked at me very seriously, and stated, "Don't worry. I will protect you from the paparazzi". I never saw any paparazzi, so he must have done his job!

Early the next morning my favorite driver drove through gate 4 at Universal Studios, took a left turn past Steven Spielberg Lane, and delivered me to the Home & Family set. I was joined by Tara Brown, from INSP, who was my 'handler' and made sure I kept to the schedule. The set was a big, beautiful modern one story house, complete with lush green lawns, landscaping and a mailbox. The interior of the house was furnished and nicely decorated. Where the interior ceilings should have been, there were massive groups of lights and wires. I was told by a producer that everything worked - like a 'real' house - except the bathrooms.

It rained - actually poured - all day long. I was told that it was the worst rain storm in the area in over 10 years.

The entire day was an exciting blur. Everyone was friendly and helpful - from the hosts Debbie and Mark, to the producer of my segment, Lily. Actor Jerry O'Connell was there to promote an upcoming movie. He made everyone laugh and even found time to chat with me. I learned that although they taped the episode to air the next day, there was no editing. We did a rehearsal in the morning, then the final taping happened in the afternoon. I was excited to find that I had my own trailer (green room) for the day, when I didn't have to be on the set. Having my makeup done was another highlight.

In the morning, I spent time demonstrating the wheat weaving so the cameramen could get closeup shots to use later. My segment was near the end of the episode, so I had the opportunity to watch the taping of the first half of the show from the sidelines. Each segment took place in different rooms of the house, so the 'audience' had to constantly move and stay behind the cameramen. Honestly, there was so much to see, I don't remember all of the guests!

My segment took place in the dining room. There I talked with Debbie, Mark and Jill about my baskets and the upcoming episode of Handcrafted America that featured Steve and I. My nervousness disappeared and I completely enjoyed myself! The piece ended after I showed Debbie how to make a Braided Heart Ornament of wheat.

Many thanks to Handcrafted America and INSP for giving me the great opportunity to be on Home & Family.

As I sat with Steve, sipping my coffee and watching my tv episode, I was content. I had had a wonderful adventure and hopefully educated people about black ash basketry and wheat weaving. Although, next time I'm on tv and standing next to beautiful, tall women - remind me to wear my heels!

The DIY Wheat Weaving instructions can be see HERE.

My segment can be seen HERE 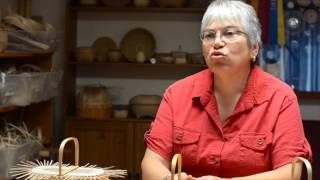